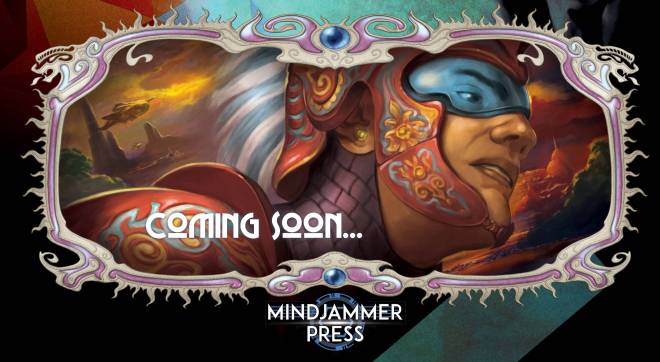 Next month, in September 2018, Mindjammer Press is going to be launching its Kickstarter campaign for its epic new game THE CHRONICLES OF FUTURE EARTH – COSMIC FANTASY ROLEPLAYING IN THE POST-HISTORICAL AGE. This massive standalone tome will be based on the Fate Core engine, highly customised to the cosmic fantasy genre, and will contain everything you need to play in this fantastic world of the far distant future. Over the coming weeks we’re going to be featuring snippets of the setting. To begin with, here are some words from Pilogiarch Jennisa Vlathu of the House of the Umbran Coil, Venerated High Priestess of the Temple of Unthar at Korudav, speaking in the year 2991 of the Fifth Cycliad…

“Look around you at the heavy red sun and the ruins of the past. Can you hear the whispered tales of the Beloved Dead? Their stories of the wars with the Mantis Men, those crumbling bones silent in the necropolises of the cities you walk every day? Your grandfather’s grandfather’s grandfather was not even a child back then, nor his parents a thought in their parents’ minds, infants playing in the sand of five hundred years ago.

Think back further to the glories of Amadorad, when the Empire’s youngest child entered its ranks. People like you and I, removed across the gulf of a thousand years.

Before that came the years when Kados was born again in stone. Those timeworn steps you climbed to this tower were once new and bright, two thousand years hence, after an age of ruin!

That new cycliad was the fifth of the Venerable Autocracy of Sakara, oldest of the Springtide Civilisations. Fifteen thousand years! An unimaginable span of time – so many lives to weigh on our minds as we dream. The dead outnumber the living!

There is one who has witnessed it all. One who lives still, who has always lived. Our beloved God-Emperor, Ankadar, Venerable Autocrator, Lord of All. Love him and fear him, for he judges the quick and the dead!

Those days are like myth, as unchanging as mountains, but real people lived through them like you and I. But what went before? What lies in the darkness before the start of Spring?

You must prepare yourself. I wonder if your mind can comprehend what you are about to see?

Before Sakara comes great darkness. Generations pass in the savagery of the Time of Snows which followed the Doom of Nayarak. But – see! – a distant light. We are through – like emerging from a cave into the light of day – and Empire is with us again, Glorious Tlan with its pageantry and its thousand Wizard-Kings, ruling the world in opulence beyond compare.

Centuries heap upon centuries, with their heroes and dreams, disasters and laughter. Gone and forgotten in the abyss of time.

Yet those ruins around you, the names you choose for your children, the songs they sing? Listen! Can you not hear the voices of Tlan? The Deeds of Gebrahil, first of the Wizard Kings, and the ill-destined Tolemiks and the Doom of Nayarak which was their curse? All these are the legacies of Tlan, Jewel of the World, and its downfall. Doubt not the truth!

We are distant from our present day. People strange with time strut and pose in fantastic garb, speaking incomprehensible words. Shining towers pierce the sky where today there is only frosted rubble and endless snow. If the Tlanik Scrolls are true, then Gebrahil’s Empire endured twice ten thousand years…

Fragments are all that remain of what went before. Fragments that speak of war and conquest, empire beyond compare. Who can help but be enchanted by names like Umbris, Pal-Goyar, the Empires of the Sea Lords and the Middle Sea? Who does not shudder with dread while poring over the scriptures of the Torture Empire and the desecrations of the Sky Raiders? Who does not ponder what were the Glories of Az Ein?

We tread paths close to myth and the beginning of the world. The glass is dark, yet figures still move like our own. But now we come to darkness. Like the gutterings of a dying candle, the Lords of the Commonality flash briefly before us, and all is fire and shadow. It is the time of the Helemoriad, the Armageddon of the Gods which forged the world anew. A hundred generations, a thousand, fought and died in the void. What went before was Paradise, unknowable and unknown. The Veil is before us. History begets legend, the child of myth. We can say no more.”

This site uses Akismet to reduce spam. Learn how your comment data is processed.